Blue Beach, Nova Scotia Canada is internationally acknowledged by todays leading researchers as the oldest fossil site in the world showing evidence of the first 4-legged, terrestrial air-breathing creatures to move from water on to land: the tetrapods.
The first discovery of the 350 million year old fossil vertebrate footprint evidence at Horton Bluff (Blue Beach) was by Sir William Logan in 1841.Much later, in the 1940’s and 1950’s a researcher from Harvard (Dr. Alfred Romer) looked for evidence of these primitive land-animals and instead found  a ‘gap’ that spanned the first 30-million years of the Carboniferous Period (360 million years ago, a time of the early coal-forests).This famous gap w…
Post a Comment
Read more 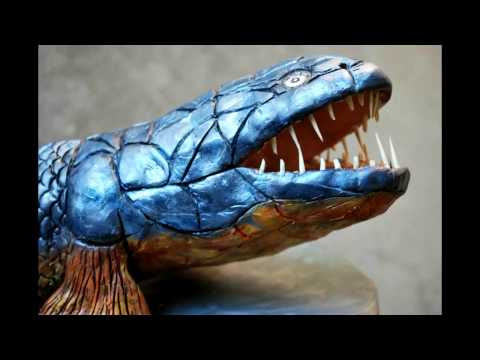 
The Blue Beach Fossil Museum Society is working hard to build a new Paleo-Centre at world class fossil site, Blue Beach, Nova Scotia Canada. Hosting many students and visitors to this amazing shoreline, their vision for the centre is destined to represent an exciting brand in the world of education and science museums - we invite you to become a founding partner in this prestigious development. The Blue Beach fossil collection contains the oldest footprints on planet Earth! These discoveries, and others, shed light on one of the most important and vexing puzzles of evolution – the transition from water to land, from fish to amphibian.

THE EPIC DREAM Built along the shores of the Minas Basin, on the Bay of Fundy, this facility will also benefit the well-being of local residents and will continue to foster research to the site’s 350 million year old fossi…
Post a Comment
Read more

Birthplace of Vertebrate Paleontology in Canada

Pioneer's of Life on Land & The Tetrapod's
at
Blue Beach, Nova Scotia Canada

The birth of ‘vertebrate paleontology in Canada’ took place one fine day in 1841, and it happened at Blue Beach, Nova Scotia (then known as Hortons Bluff). Sir William Logan discovered fossilized footprints of the first creatures, ever, to swim out of the water and walk on land, the tetrapods. These Lower Carboniferous creatures were the first air breathers of the coal-period.

Logan, a Scottish-Canadian geologist, was born April 20 1798 in Montreal and as a young boy his family moved back to Edinburgh, Scotland where he got his education. He never forgot of his childhood in Canada and dreamed of returning one day. Later, as a young man, he did returned to Canada and in 1842 was asked to establish, and became the first Director of the Geological Society of Canada and carried on as Director until 1869.

Until now, artistic renderings of the rhizodonts have been very few and far between. There are less than a half-dozen drawings of whole-body rhizodonts in publication, even when one counts in the scientific journals. The general confusion in our history of rhizodontid fish studies has not only slowed the output of the scientists: it has nearly guaranteed that these fish would remain unmentioned while media has fed us a steady diet of comfortable paleontological subjects. Of course the story of life on earth is incredibly diverse and fascinating, so there are hundreds of subjects to feed a curious audience of such things.
There is a 3-D model of the rhizodont now at the Blue Beach museum, where it contributes to a large display of rhizodontid fossil bones. We use this to puzzle together the skeleton of a previously obscure fossil fish named Letognathus, which tr…
Post a Comment
Read more

The Word From Above

~~~~~~~~~~~~~~~~~~~~~~~~~~~~~~~~~~~~~~~~~~~
January, 19th 2007
To Whom It May Concern: I am writing today in recognition of Blue Beach (also known as Hortons Bluff), Nova Scotia, as one of the most important fossil localities in North America. As such, the conservation of its fossils, both found and waiting to be collected, is tantamount to ensure our better understanding of the animals that passed over the fish-tetrapod boundary.
While dramatic, fully articulated skeletons haven’t (yet) been found, the vertebrate fossils of Blue Beach tell and interesting story. They represent the oldest fossils within the mysterious gap in the fossil record known as “Romer’s Gap”. Our emerging picture of the fauna from Blue Beach is one of transition; a Devonian-like form is present with classic Mississippian embolomeres, colosteids, and whatcheeriids. In no other place in the world can such fossils, of such an age, be found, making …
Post a Comment
Read more
More posts