Every fisherman seems to have a good story about ‘the one that got away’. This all-too familiar scene has been repeated in books and art; in theatres and on film. The so-called ‘big fish story’ has, in short, become something of a North-American tradition. So by this point you’re probably already thinking “…just about heard them all”, and you could be forgiven for reacting sceptically to the above title. Trust me, this is a fish story you probably never heard before.

For several years now my work at Blue Beach, Nova Scotia (Canada) has involved, among other things, uncovering a truly big fish that’s been extinct for hundreds of millions of years. Fossils of this giant fish, belonging to the family Rhizodontida, have grown into a ‘massive’ collection that has spilled out of the Blue Beach Fossil Museum near Hantsport; and now also happens to occupy the greater part of our basement. The ongoing discovery of thousands of skeletal parts at Blue Beach, in 350 million year-old sedimentary rocks, is providing new information on these mysterious and lurking beasts. Were it not for the powerful tides of the Bay of Fundy these rare and spectacular fossils would seldom be found. They are, however, now accumulating quite nicely.

Rhizodonts were enigmatic ‘lobe-finned’ fish that grew up to 8 meters in length, larger than your average sport-fishing boat (1).

Weighing in at several tons, it’s probably good they no longer terrorize marshes and lakes. For one thing they’d probably give the crocodiles and alligators a real run for their money, because they’d be virtually occupying the same ecological niche. Rhizodonts were big ambush predators whose behaviour and feeding strategy in many ways mirrored that of today’s crocs. These huge fish could evidently also crawl on their powerful front fins, gulping air into primitive lungs and even, presumably, gave chase. This remarkable feat doesn’t seem so surprising when one looks at the skeletons of their fins. Rhizodonts possessed arm bones.

Another way to characterize rhizodonts is to say they were more closely related to us than any living fish is today. Rhizodonts have recently been resolved as 'basal members of the Tetrapodomorpha’ (2), which literally means changing towards four-leggedness. They were part of the evolutionary history of vertebrates when land-animals separated from their fish-ancestors. The rhizodonts can be likened to the first 100 meters of the off-ramp leading towards a new, four-legged condition. They’re not the ones who actually changed their fins into the first limbs – they’re the start of the movement. Several families down the road would be the ones that made the final changes, and thanks to this we vertebrates eventually conquered land.


Scientists still know less about this enigmatic group of fishes than they do about any other lobe-finned group. The main reason for this is purely taphonomic, or because of the realities of fossil preservation. Large animals are less-likely to be fossilized ‘intact’ than small animals. Adult rhizodonts were of such size, the likelihood of 'their’ preserving as intact skeletons is slim. To compound this problem, rhizodont skeletons were rather weakly connected throughout – adaptations to improve flexibility and reduce weight. Their skeletons were therefore ‘quite prone to coming apart’, or disarticulating. To this day the complete adult rhizodont skeleton remains undiscovered. Paleontologists must therefore work with individual rhizodont parts, assembling these like a puzzle to eventually conceive an entire skeleton. At Blue Beach, where twice per day the highest tides in the world are working to steadily expose fossils, we’ve finally gathered more parts than ever seen before. This research is resulting in a previously-obscure fossil fish from Blue Beach eventually becoming the best-known example of the mysterious Rhizodontida.
Trace fossils: new perspectives


The rhizodont project at Blue Beach involves additional avenues of inquiry such as the ‘trace fossil’ evidence. Trace fossils are not actual parts of animals like the bones are, but some act of an animal, usually some kind of markings. Traces include tracks, trails, tunnels, burrows and borings on one hand – but also things like fecal remains, stomach contents, vomitus, webs, nests, and so forth. Trace fossils can also be defined as activities or behaviours, usually the work of some animal. They inform on aspects of ancient life after the body fossils have nothing more to tell. 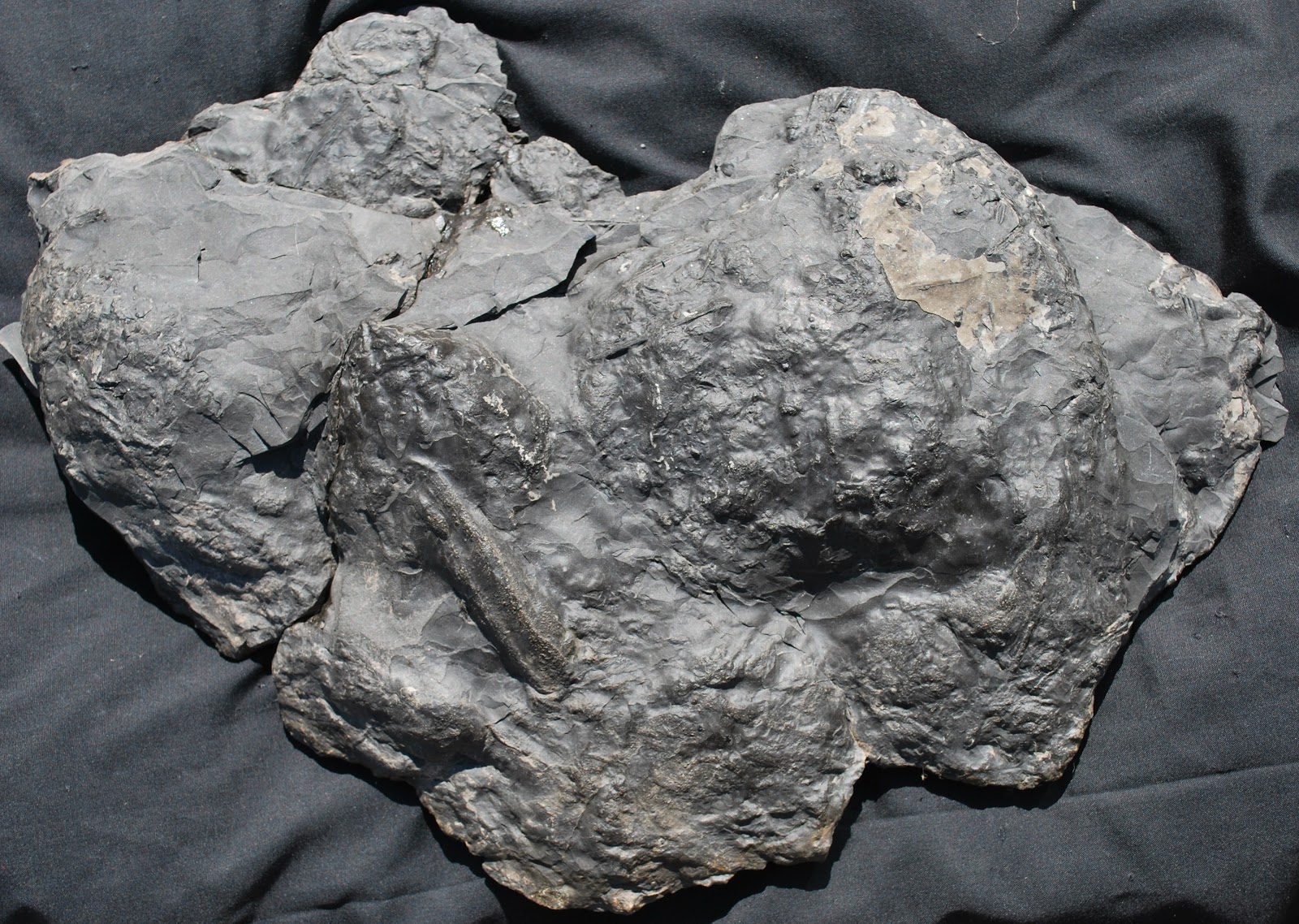 One of the most unusual traces at Blue Beach are some recently discovered ‘intestinal-contents’of the big dead fish (3). These show the rhizodonts apparently caught and ate whatever came too close, as they contained an unusual quantity of vertebrate bones, including smaller members of their own species. Also not safe from the hungry rhizodonts were numerous small, shark-like fishes with bony fin-spines, and shiny-scaled little palaeoniscoid fishes: together their bones made up the bulk of what these rhizodonts were eating. Finally, a single leg bone belonging to an early amphibian or tetrapod, shows that land-animals were also preyed upon; perhaps sometimes even after a brief chase onto the land.
The idea that lobe-finned fishes were occasionally using their pectoral-fins to ‘crawl’ has long been accepted because of the obvious limb-like structure of their fins. However, theories about ancient crawling behaviour based solely on features of the fins never managed to make it past the theoretical stage. Any obvious and deliberate crawling activity by the fishes should have left its fair share of markings in the trace-fossil record, but no verified cases have been reported. By sharp contrast, the footprints of very early tetrapods were first recognized over 170 years ago. As coincidence would have it, this first Carboniferous-aged footprint discovery was made here at Blue Beach (also called ‘Hortons Bluff’) by Sir William E. Logan in 1841. Blue Beach has therefore already played a very significant role in the early history of ichnology (the study of trace fossils).


The long-awaited confirmation of ‘crawling behaviour’ in lobe-fins can now be said to exist in some recently recognized rhizodont-trails at Blue Beach (3, 6). These traces have been observed by scientists on many occasions, but they have never been properly identified for what they are. Numerous fin-imprints, belly-resting imprints and tail-drags are preserved on several conspicuous layers that represent ancient mudflats. More than one set of these fin-impressions form continuous trails; one has an apparent length of over 50 meters. This impressive example (with fin-imprints larger than a human foot), was first discovered in the early 1960’s, and was later described as the track of a large amphibian 4, 5). Some now believe otherwise, (Spencer G. Lucas of the New Mexico Museum of Natural History, and Science and I, for example). We regard 'the giant trackway’ to be the trail of a big fish﻿.

As paleontologists have recently come to appreciate, trace fossils often provide new insight where the body fossil record has nothing more to add. Subtleties regarding trace-maker behaviours, as well as vital clues to their ecology and environmental preferences: only trace fossils can inform us on these. The utility of trace fossils for adding these new dimensions to the reconstructs of ancient ecosystems has now become widely recognized as an important tool for solving many paleontological questions.


I especially wish to thank Sonja E. Wood, my wife and co-founder of the Blue Beach Museum, for all her time and effort and for her evaluation and improvements in this article. I also wish to thank Dr. Spencer G. Lucas for his continued moral and technical support.


﻿Birthplace of Vertebrate Paleontology in Canada

(1) Andrews, S. M., 1985, Rhizodont crossopterygian fish from the Dinantian of Foulden, Berwickshire, Scotland, with re-evaluation of this group; Transactions of the Royal Society of Edinburgh, Earth Sciences, v. 76, p. 67-95. 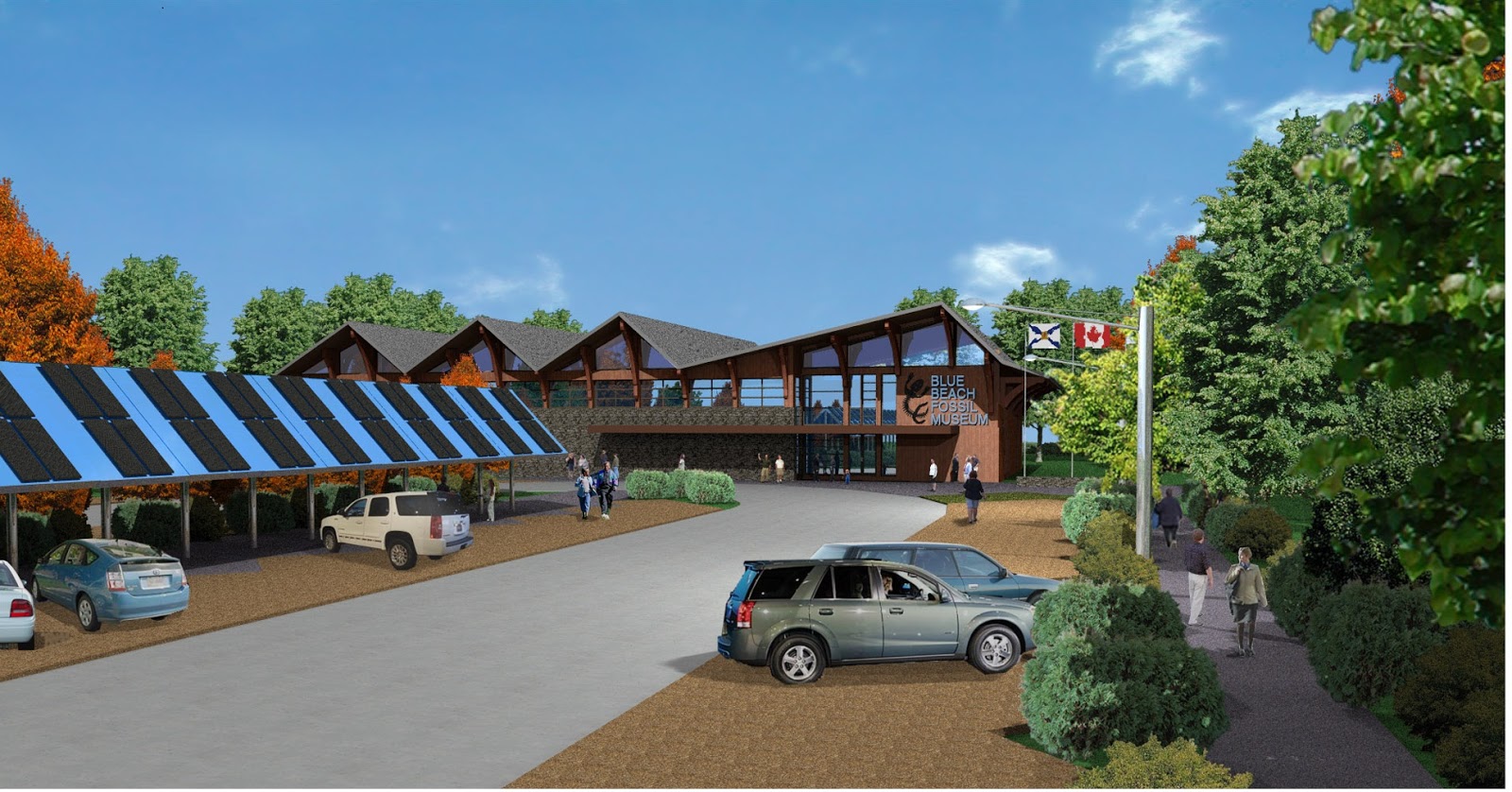